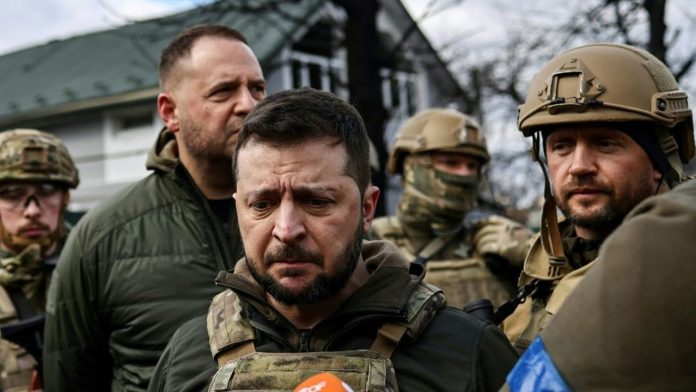 United Nations (United States) (AFP) Ukrainian leader Volodymyr Zelensky called on Wednesday for the world to punish Russia in a dramatic speech to the United Nations General Assembly, as US President Joe Biden accused Moscow of violating basic international norms.
Setting what he called peace terms, Zelensky – the only leader allowed to actually address the summit – called 15 times to “punish” Russia for its invasion.

Ukraine demands punishment for the attempted theft of our lands. Punishing the killing of thousands of people. “Punishment for the torture and humiliation of women and men,” Zelensky said in English in a pre-recorded video.

Wearing his signature green military shirt, Zelensky received a rare welcome at the General Assembly, which returned in person after two years of pandemic restrictions.
Zelensky called for a special court to hold Russia accountable, saying it would be “a signal to all potential aggressors.”

US President Joe Biden addresses the 77th session of the United Nations General Assembly
He also demanded a compensation fund, saying that Russia “must pay for this war with its own assets.”

His speech came hours after Russian President Vladimir Putin mobilized reservists and disguised his threat to use nuclear weapons, indications that he is in no hurry to end the war.
Zelensky made it clear that he saw no point in immediate talks, saying that Russia was only using diplomacy to buy time on the battlefield.

Russia is afraid of real negotiations and does not want to implement any just international commitments. It lies to everyone – as is customary to aggressors and terrorists.”
– Convincing the world on UN reform –

Zelensky became a symbol of resistance in the West, which responded with sweeping sanctions against Russia and billions of dollars in military equipment for Ukraine.

But the former actor seemed aware of the resentment in the developing world about the focus on Ukraine. He noted the lack of African and Latin American representation in the Security Council, and called for Russia to be stripped of its veto.

Biden has also sought to woo the developing world, announcing another $2.9 billion to tackle global food insecurity — which has worsened markedly since the invasion of Ukraine, a major exporter of grain.

Biden threw his support behind expanding the United Nations Security Council, an idea that has been researched for decades but previously seen a dip in American enthusiasm.
He threw his support behind the Security Council seats for Africa and Latin America.
“Russia has shamelessly violated the basic principles of the United Nations Charter,” Biden told the General Assembly.

“Let’s speak frankly. A permanent member of the United Nations Security Council invaded his neighbor – he tried to erase the sovereign country from the map.”
The United States has previously offered verbal support but little enthusiasm for years of calls for Security Council reform. It had earlier backed bids from Japan and India.

Biden also promised that the United States would “refrain from vetoing, except in rare and unusual cases, to ensure that the council remains credible and effective.”
In recent years, Russia has been the most frequent user of the veto. The United States, China, France and Britain also have veto power, a legacy of the power dynamics at the end of World War II.

The European Union said its foreign ministers would hold an emergency meeting late Wednesday in New York to address Putin.
EU foreign policy chief Josep Borrell told reporters that new sanctions “will certainly be on the table.”
– No ‘cold war’ with China –

Demonstrators attend a rally to demand the trial of Iranian President Ebrahim Raisi near the United Nations
Amid warnings of a growing global divide, Biden has also sought to calm tensions with China, days after promising once again US support for Taiwan if Beijing invades the autonomous democracy.

“As we manage shifting geopolitical trends, the United States will act as a reasonable leader. We do not seek conflict and we do not seek a cold war,” Biden said.

The Biden administration has encouraged what it sees as less than complete Chinese support for Putin, who recently admitted that Beijing has concerns about the Ukraine war.
Other leaders who addressed the United Nations included Iranian President Ebrahim Raisi, who traveled to New York as protests spread in his country over the death of a woman arrested by morality police.

Biden said Americans “stand by the brave women of Iran” after the death of 22-year-old Mahsa Amini, who was allegedly beaten to death after not wearing her headscarf in accordance with state religious guidelines.
My chief accused West of “double standards” as he mentioned the killings of Aboriginal women in Canada.