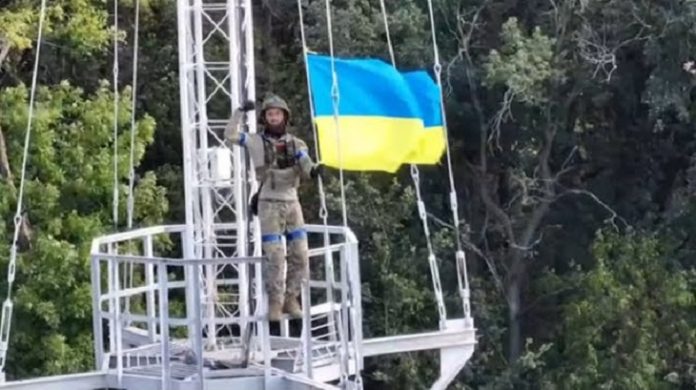 KRAMATorsk (Ukraine) (AFP) – Ukraine said on Monday its forces had retaken more territory in the past 24 hours and recaptured an area seven times the size of Kyiv this month, as Russia retaliated with strikes in some retaken areas.

The territorial shifts were one of Russia’s biggest setbacks since its forces were turned back from Kyiv in the early days of the nearly seven-month fighting, yet Moscow indicated it was not about to agree on a negotiated peace.

The withdrawal of Russian forces in recent days has sent locals crying and relief to the bomb-strewn streets, including on Sunday in the strategic but hard-hit town of Izyum.

“It is not enough to say that I am happy. I do not have enough words to express myself,” said Yuri Koroshka, 64.

But by Monday, Moscow had announced air, missile and artillery attacks on reclaimed areas in the Kharkiv region, a day after Kyiv said Russian strikes on electricity infrastructure had caused blackouts.

Kyiv had already announced the recapture of Izyum in the east of the country, while President Volodymyr Zelensky said on Monday that Ukrainian forces retook a total of 6,000 square kilometers (2,320 square miles) from Russian control in September.

“Ukraine has turned the tide in its favour, but the current counterattack will not end the war,” tweeted an American think tank studying the war.

Russian forces withdrew from the badly damaged city of Izyum

Defense Minister Oleksiy Reznikov told the French newspaper Le Monde, in an interview published on Monday, that the war had entered a new stage with the help of Western weapons.

Moscow has acknowledged its territorial loss – which experts have seen as a serious blow to its war ambitions – but Kremlin spokesman Dmitry Peskov sees no prospects for negotiations.

“The special military operation is ongoing and will continue until the objectives that were originally set are achieved,” he added, using Russian terminology for the internationally condemned war.

The Ukrainian military said Russian strikes hit 15 sites on Sunday, from Kramatorsk in the east to Mykolaiv in the south and Dnipro in between.

Ukraine had already lost all power from the Russian-controlled Zaporizhia nuclear plant, threatened by bombing since the February invasion.

Ukraine says the war has entered a new phase

The country’s nuclear energy agency said the last reactor at the plant – Europe’s largest nuclear power plant – was shut down as a security measure.

The United Nations’ International Atomic Energy Agency said on Monday that Kyiv and Moscow had shown “signals of interest” in establishing a security zone around the plant.

“What we really need here is Ukraine and Russia to agree on a very simple principle of not attacking or not bombing the plant,” IAEA Director-General Rafael Grossi told reporters.

But later on Monday, Ukrainian Foreign Ministry spokesman Oleg Nikolenko said the only way to “ensure the nuclear safety and security of the Zaporizhzhya power plant is to remove the occupation, disarm and return to Ukrainian control.”

“All IAEA efforts must be focused on achieving this goal,” he wrote on Twitter.

The pace of the fighting in Ukraine seems to have caught the Russian army by surprise, as a result of which large swathes of territory held by Moscow for several months were returned to the Kyiv fold.

Pictures published by the Ukrainian army showed boxes of ammunition and military equipment scattered in areas left by Russian forces.

AFP journalists across the town of Balaklia saw evidence of fierce battles, with buildings destroyed or damaged and streets often deserted.

The Ukrainian authorities also claimed to have found the bodies of four civilians with “marks of torture” in the captured village of Zalznychny.

The regional prosecutor’s office said residents reported that villagers had been killed by Russian forces.

“Arms, weapons and weapons have been on our agenda since the spring. I am grateful to the partners who answered our call: Ukraine’s successes on the battlefield are our common successes,” said Foreign Minister Dmytro Kuleba.