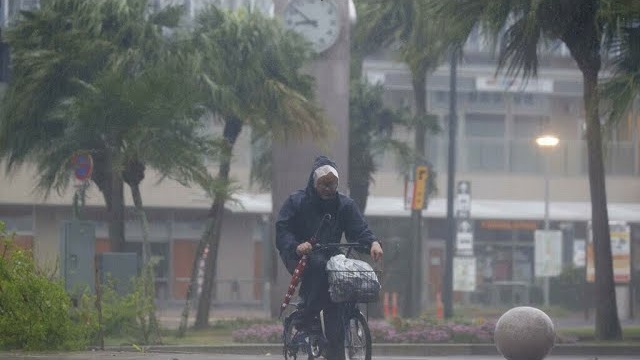 The Japan Meteorological Agency (JMA) has issued a rare “Special Warning” for Kagoshima and Miyazaki in the Kyushu region – an alert that is issued only when it forecasts conditions seen once every several decades.

By Sunday morning, torrential rain and high winds hit the area on the southern island of Japan, with nearly 98,000 households already without power in Kagoshima, Kumamoto, Nagasaki and Miyazaki.

Trains, flights, and ferries were canceled until the storm passed, and even some small shops – which are generally open throughout business hours and are a lifeline in disaster situations – were closing.
“Please stay away from dangerous places, and please evacuate if you feel the slightest hint of danger,” Prime Minister Fumio Kishida wrote on Twitter after a government meeting on the storm.
“It would be dangerous to evacuate at night. Please go to safety while the light is still out.”
The JMA warned that the region could face an “unprecedented” danger from high winds, storms and torrential rain.

“Maximum caution is required,” JMA forecasting unit head Ryota Korora said on Saturday.
“It’s a very dangerous hurricane.”
“The winds will be so strong that some houses may collapse,” Korora told reporters. He also warned of the occurrence of floods and landslides.

The Japan Meteorological Agency has warned that Typhoon Nanmadol will be a dangerous storm
More than four million people across Kyushu have been issued evacuation warnings, and officials in Kagoshima and Miyazaki said more than 15,000 people were in local shelters on Sunday afternoon, national broadcaster NHK, which compiles local warnings.

Evacuation warnings are calling for people to move to shelters or alternative housing that can withstand severe weather.
But it is not mandatory, and during past severe weather events authorities have struggled to persuade residents to take cover quickly enough.

Korora urged people to move before the worst of the storm arrived and warned that even in sturdy buildings, residents would have to take precautions.

“Please move to sturdy buildings before the strong winds start to descend and stay away from windows even inside strong buildings,” he said at a late-night news conference.- ‘As much caution as possible’ –
By Sunday morning, high-speed train operations in the area had ceased, and NHK said hundreds of flights had been cancelled.

Typhoon Nanmadol is expected to make landfall in southern Japan before turning to the northeast and moving across the rest of the country.

“The southern part of Kyushu may experience the kind of high winds, high waves and high tides that have never been seen before,” the JMA said on Sunday, urging residents to exercise “the highest possible caution.”

On the ground, an official in Izumi, Kagoshima, said conditions were rapidly deteriorating.
“The wind has become very strong. It’s raining too,” he told AFP. “It’s a completely white area outside. Visibility is almost non-existent.

On the coast in Kyushu’s Minamata City, tethered fishing boats sway for safety on the waves, as the boardwalk has been flooded with sea spray and rain packets.
As of 1 p.m. (0400 GMT), the typhoon was laying over the small island of Yakushima, packing wind gusts of up to 234 kilometers (146 miles) per hour.

It is expected to make landfall in Kyushu on Sunday evening, before turning northeast and sweeping the main island of Japan until early Wednesday.
Japan is currently experiencing typhoon season and experiences about 20 such storms annually, and routinely experiences heavy rain that causes landslides or flash floods.

Japan is currently going through its annual typhoon season
In 2019, Typhoon Hagibis hit Japan where it hosted the Rugby World Cup, killing more than 100 people.
A year ago, Typhoon Jebi closed the Kansai Airport in Osaka, killing 14 people.
And in 2018, floods and landslides killed more than 200 people in western Japan during the country’s annual rainy season.
Scientists say climate change is increasing the intensity of storms and causing an increase in the frequency and intensity of extreme weather such as heat waves, droughts and flash floods.