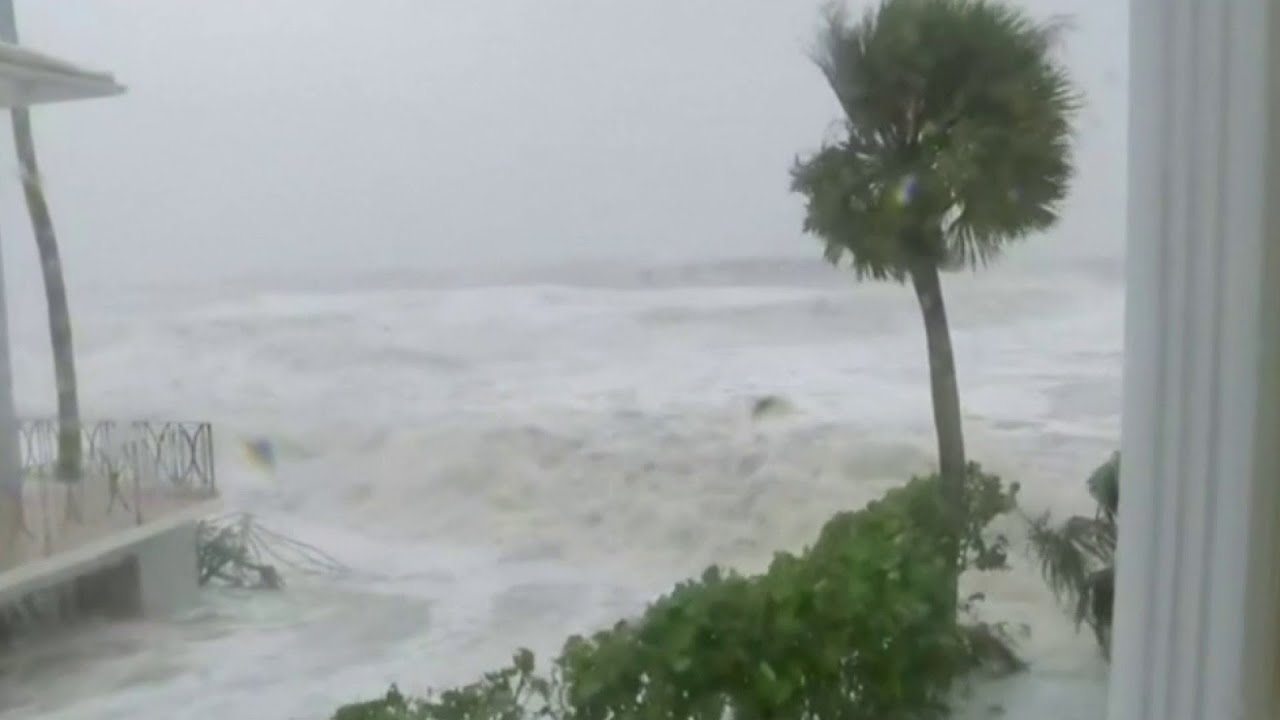 An aerial photograph taken on September 30, 2022 shows destroyed homes in the aftermath of Hurricane Ian in Fort Myers Beach, Florida
FORT MYERS (United States) (AFP) – Deadly Hurricane Ian, one of the most powerful storms ever to hit the United States, was still flooding parts of the country early Saturday, but began to subside after it swept through Florida.
The National Hurricane Center (NHC) said Ian made landfall Friday afternoon near Georgetown, South Carolina, as a Category 1 hurricane with maximum sustained winds of 85 miles (140 kilometers) per hour.
It was later downgraded to a post-tropical hurricane, and by 5 a.m. Saturday (0900 GMT), its sustained airspeed had dropped to nearly 35 miles per hour as it passed through North Carolina, according to the NHC.
Although the NHC said heavy rains continued and “limited” flooding was still possible across the central Appalachian Mountains and the mid-Atlantic as Ian moved north, the storm was expected to continue to weaken and “is expected to dissipate over south central Virginia” by Saturday night. .
As for storm-hit Florida, President Joe Biden said Friday: “We’re just beginning to see the scale of the devastation.
“It’s likely to be among the worst in the nation’s history,” he said of Ian, which broke off into Florida’s southwest coast Wednesday as a Category 4 storm, a mark shy of the strongest storm on the Saffir-Simpson wind scale.

People clear debris in the aftermath of Hurricane Ian in Fort Myers Beach, Florida on September 30, 2022
The Florida Department of Law Enforcement said Friday evening that the death toll from the storm had reached 23.
County officials were quoted by the media as citing higher tariffs, with CNN saying 45 deaths were blamed on Ian.
Also, 17 migrants are still missing from a boat that sank during the hurricane on Wednesday, according to the Coast Guard. One person was found dead and nine others were rescued, including four Cubans who swam ashore in the Florida Keys.
With damage estimates running into the tens of billions of dollars, Biden said it would “take months and years to rebuild.”
“It’s not just a crisis for Florida,” he said. “This is an American crisis.”
Real estate analyst CoreLogic said wind-related losses for residential and commercial properties in Florida could cost insurers up to $32 billion, while flood losses could reach $15 billion.
“This is the costliest storm in Florida since Hurricane Andrew made landfall in 1992,” CoreLogic’s Tom Larsen said.
– ‘We succeeded’ –

Sanibel Road was left crumbling and impassable due to Hurricane Ian, which destroyed much of Sanibel Island, Florida.
Rescue teams were assisting survivors Friday in devastated Florida communities, and the US Coast Guard said it had completed 117 rescues using boats and helicopters for people trapped in flooded homes.
Governor Ron DeSantis said hundreds of other rescuers are going from house to house “up and down the coast.”
DeSantis said the coastal town of Fort Myers, where the hurricane first made landfall, was “ground zero” but “this was such a big storm that there are effects far inland,” including severe flooding in the city of Orlando.
Many Florida residents were evacuated before the storm, but thousands chose to take shelter and ride.
More than 1.4 million Florida residents remained without power Friday, and two hard-hit islands near Fort Myers — Pine Island and Sanibel Island — were cut off after the storm damaged bridges to the mainland.

A family gathers in a flooded parking lot outside their neighborhood in New Smyrna Beach, Florida
Aerial images and videos show staggering devastation in Sanibel and elsewhere.
In Fort Myers Beach, a recreational boat called a Crackerjack sat atop a pile of wreckage like an abandoned game. The stand for the trailers was blown to almost nothing.
Meanwhile, in North and South Carolina, nearly half a million customers were without power, according to poweroutage.us tracking.
In Fort Myers, a few restaurants and bars have reopened, giving the impression of normalcy amid fallen trees and smashed storefronts.

Map showing potential flooding due to storm surges in Georgia and South Carolina due to Hurricane Ian
Dozens of people sat on the stands under the bright sun, drank beer and ate.
Dylan Jumper, 23, said he had been waiting for two hours at a pizzeria for food to be brought home.
“It was kind of bad, but we made it through,” said Jumper. “The roof of our house fell, a big tree collapsed across our cars, our yard was flooded, but we were otherwise pretty good.
“As a community, we seem to come together and help each other.”
– ‘Everyone is submerged’ –

Aerial view of damaged buildings in Fort Myers, Florida
In nearby Bonita Springs, Jason Crosser was inspecting the damage to his store.
“The entire building was flooded,” said Croeser, 37. “It was all submerged. It was all salt water and water damage.”
Before hitting Florida, Ian plunged the whole of Cuba into darkness after bringing down the island’s power grid.
Electricity has been gradually returning, but many homes are still without electricity.
Scientists say human-caused climate change is leading to more extreme weather events around the world — including with Ian.
US scientists said that according to a quick and preliminary analysis, human-caused climate change has increased Ian’s heavy rainfall by more than 10 percent.