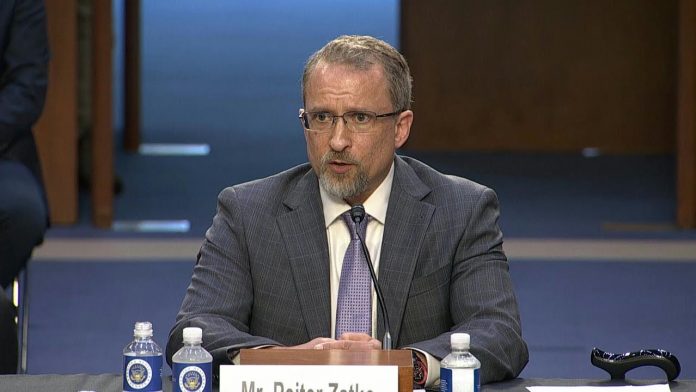 Washington (AFP) – Twitter whistleblower Peter Zatko told the US Congress on Tuesday that the platform had ignored his security concerns, as his testimony came about the company’s $44 billion takeover of Elon Musk.

The shareholder’s decision paves the way for the contract to be closed, even as billionaire Musk attempts to withdraw from it. Twitter sued him to force him to do so, but analysts said testimony from Zatko, the social network’s former security chief, will put more pressure on the company as it heads to court next month.

“I am here today because Twitter’s leadership is misleading the public, legislators, regulators and even its board,” Zatko, a hacker widely known as “Mudge,” said at the session.
He said that during his tenure as the platform’s chief of security from late 2020 until his dismissal in January of this year, he tried to alert management to serious vulnerabilities of hacking or data theft — but to no avail.

“They don’t know what data they have, where you live, or where it came from. So it’s not surprising that they can’t protect it,” Zatko said during his opening speech to the Judicial Committee.

“Then the employees have to have a great deal of access (…) It doesn’t matter who has the keys if you don’t have any locks on the doors.”

Zatko testified that he provided concrete evidence of problems to the executive team and “has sounded the alarm time and time again”.

“Frankly, Twitter leadership has ignored its engineers because key parts of leadership lack competence to understand the scope of the problem,” he said.

“But more importantly, their executive incentives led them to prioritize profits over security.”
Zatko’s lawyers described the hearing as a “watershed moment” that he hopes will enlighten the public and contribute to much-needed legislation targeting tech platforms.

Twitter dismissed the 51-year-old’s complaint as unfounded.
But the revelation of his whistleblower report in the US press in August was perfectly timed for Tesla chief Musk, who used it as part of his justification for abandoning his unsolicited $44 takeover offer.

– ‘The elephant in the room’ –
In his report, Zatko refers directly to questions Musk has about bot accounts on Twitter, saying that the company’s tools and teams for finding such accounts are insufficient.

While testifying before a Senate committee, former Twitter security chief Peter Zatko said nothing about the fake accounts that Elon Musk used as a reason to walk away from his deal to buy the company.

The account holder listed the bot as one of the reasons for his withdrawal from the deal. He is suing Twitter to force him to complete the acquisition, with the trial set to begin on October 17.
Wedbush analyst Dan Ives told AFP that Zatko’s testimony “puts more pressure on the Twitter camp ahead of the Musk and Twitter trial.”

“Twitter shareholders’ approval of this deal was a no-brainer, but the main challenge now begins with Musk’s trial,” he said.

“The Elephant in the Room is a Zatko attitude that could be a Twitter camp albatross and derails this deal.”
If Twitter wins in the trial, a judge can order the Tesla boss to pay the company billions of dollars, or even complete the purchase.

Zatko insisted that he did not disclose his findings “out of malice or to harm Twitter”.
“Far from that, I still believe in the mission of the company,” he told Tuesday’s hearing.
Musk, himself an avid Twitter user, didn’t immediately comment on the hearing – but tweeted a popcorn emoji during Zatko’s talk, suggesting he was watching the proceedings closely.
Jasmine Enberg, Insider Intelligence analyst, said: “Zatko’s testimony doesn’t provide much new information.

“There was also no mention of bots, but that doesn’t mean that Musk won’t use Zatko’s claim that Twitter was not interested in removing bots to try to bolster his argument for abandoning the deal.”