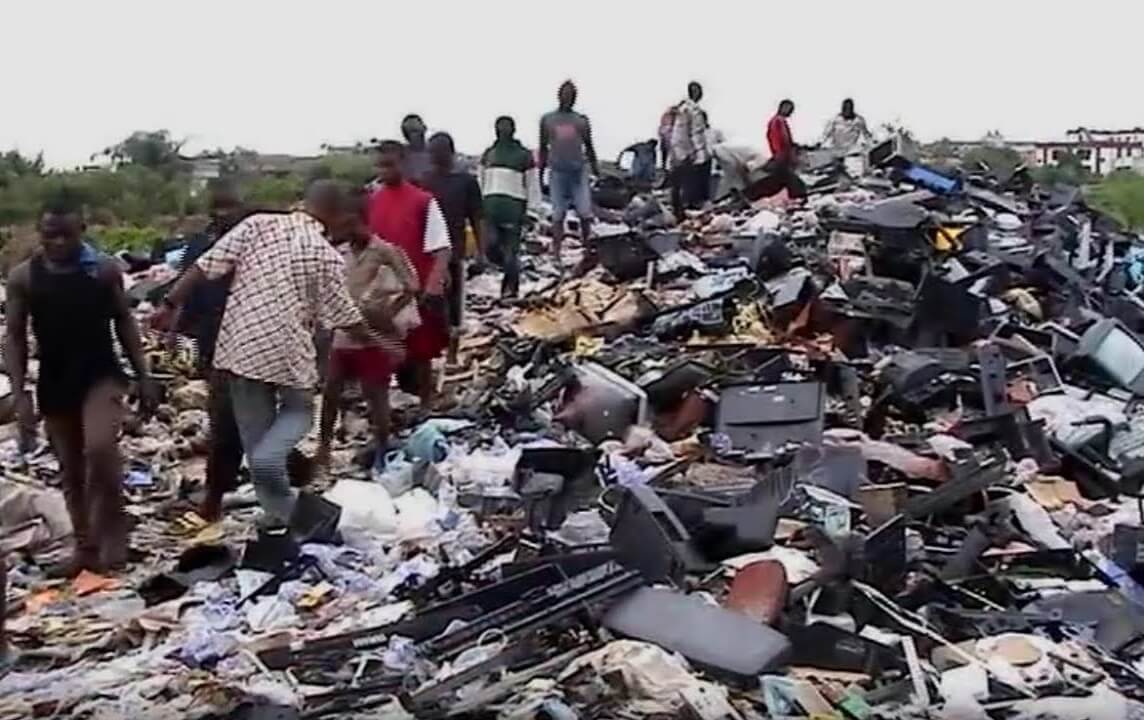 There is money in the trash: scrap metal at the Romco recycling plant in Lagos
Lagos (AFP) – Heaps of garbage scattered along roads and vast landfills are a Nigerian sight.
In Africa’s largest and most populous economy, waste collection, sorting and recycling is hopelessly rare.

But there is also good news. Some entrepreneurs are working hard to tackle the mountain of trash, despite the many challenges.

Romco Metals began recycling aluminum at its plant outside of Lagos in 2015, driven by global demand for the metal that is light, strong and flexible.

Buoyed by the good results, it has built a second facility outside the Ghanaian capital Accra and now plans to open at least three new plants across Africa and triple production by 2025.
Aluminum is the second most used metal in the world after steel and is widely used in construction, medicine and the automotive industry.

Britain-registered Romco melts and recycles around 1,500 tons of discarded aluminum per month, out of a total of 3,000 tons.

It says it has created 450 direct jobs – 5,000 in total, in this labour-intensive sector – and plans to double that number within a year.

“Before…there was no work,” community leader Pankol Gbenga, known as Chief Apure, told AFP during a recent visit to the Lagos facility.

Leader Abore says that over a hundred young people from his community alone now work for Romco in some capacity.

“Some of them work in carpentry, some are welders … and some young people do security,” said the 40-year-old.

Among those who have benefited most from Romco’s business are material suppliers such as Mohamed Ashiro Madogo, who delivers several trucks loaded with scrap metal each week.
Madogo owns a warehouse in northwest Katsina, where suppliers from all over the state and even neighboring countries bring him discarded minerals.

Romco melts discarded aluminum and casts it into ingots that are then shipped to markets in rich economies
He loads goods into trucks and sends them all the way to Lagos, more than a thousand kilometers (600 miles) away.
For a single truck, he can get up to 26 million naira (about $60,000) despite the price fluctuation.
The scrap supplier said these trips require an escort due to the risk of ambushes by criminal gangs on the road.

Romko later told AFP that none of his suppliers needed escorts and none of them were involved in any attacks by criminals.

“We don’t have any cases of anything like this,” she said in a statement.

Only a tiny fraction of waste is recycled in Nigeria, a country of about 210 million consumers.
Plastics, metals, and glass that are routinely captured and processed in advanced economies are routinely discarded.

Lagos drain clogged with waste. The United Nations says Nigeria throws 200,000 tons of plastic into the Atlantic Ocean every year

In Lagos alone, a city of over 20 million people, less than 10 percent of total recyclables are collected, Ibrahim Adigon Odomboni, managing director of the Lagos State Administration Agency, told AFP.

By comparison, in the UK, more than 41 percent of the waste picked up by local authorities last year was recycled, according to British statistics.

For Odumboni, recycling initiatives should be applauded, but companies that make aluminum beverage cans and other products should do more.

“We need manufacturers to invest in a collection system. In many parts of the world, a portion of what producers sell goes to recover products. We don’t currently have this in Nigeria.

If the companies selling aluminum products were “not responsible (for waste collection), it wouldn’t make sense – we’re just going in a circle.”

He blames bad legislation but says an improved Extended Product Responsibility (EPR) law is currently being discussed in the state House of Representatives.

Ready to Ship: Romco Forklift Truck Puts Recycled Aluminum Into Container
EPR is an environmental policy in place in many countries that gives producers incentives to take responsibility for their products after they have been used.

Another challenge for recyclers is the carbon emissions from the energy they use to crush, shred or melt old materials.

Romco, for example, uses compressed natural gas to turn aluminum into alloys.
(It is) still a fossil fuel but it is the best and most efficient fossil fuel. It contains no lead or sulfur, Onuvuigon said.

However, the company says it wants to be independent of fossil fuels and is “exploring the potential of using solar energy, green hydrogen, and biofuels.”

What do inflation shields look like in Spain, Greece and Germany?

Strike of liberal doctors: the government does not want “neither to work nor to respond to our proposals”, denounces the collective “Doctors for tomorrow”