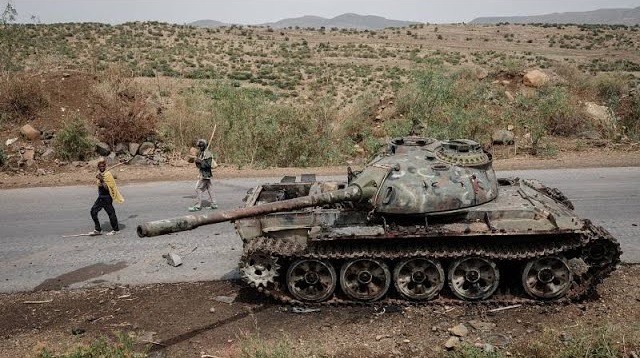 Both sides accused each other of violating the armistice that has been in place since late March
Nairobi (AFP) – Ethiopia’s Tigray rebels said Sunday they were ready for a ceasefire and would accept an African Union-led peace process, removing an obstacle to negotiations with

the government to end nearly two years of brutal war.
The announcement came amid a flurry of international diplomacy after fighting erupted last month for the first time in several months in northern Ethiopia, torpedoing a humanitarian truce.

“The government of Tigray is ready to participate in a robust peace process under the auspices of the African Union,” a statement issued by the Tigray authorities said.
Moreover, we are ready to commit to an immediate and mutually agreed cessation of hostilities in order to create a favorable atmosphere.

The Ethiopian government said earlier that it is ready to hold unconditional talks “anytime and anywhere” mediated by the African Union, which is based in Addis Ababa.

The Tigray People’s Liberation Front has so far been strongly opposed to the role of the African Union’s envoy to the Horn of Africa Olusegun Obasanjo, in protest of his “closeness” to Ethiopian Prime Minister Abiy Ahmed.

African Union Commission Chairperson Moussa Faki Mahamat issued a statement welcoming development as a “unique opportunity to restore peace” and urging “the parties to work urgently for an immediate ceasefire and to engage in direct talks.”

In a statement, UN Secretary-General Antonio Guterres called on the parties to “seize this opportunity for peace and take steps to end violence once and for all and opt for dialogue.”
He said the United Nations is ready to support the peace process led by the African Union.

Tai Dindia, Ethiopia’s Minister of State for Peace, described the Tigray People’s Liberation Front’s announcement as a “nice development” on Twitter but insisted that “the so-called Tigray Defense Forces must be disarmed before peace talks begin. A clear position!”

– Pursuing a ‘credible’ peace process –
The Tigrayan People’s Liberation Front’s statement, which coincided with Ethiopia’s new year, made no mention of preconditions, though it said the Tigrayans expected a “credible” peace process with “mutually acceptable” mediators as well as international monitors.

TPLF leader Gebremichael proposed a conditional truce earlier this month calling for “unrestricted humanitarian access” and the restoration of basic services in Tigray, which is suffering from food shortages and a lack of electricity, communications and banking.

Debretsion revealed last month that two rounds of secret, face-to-face meetings took place between senior civilian and military officials, the first acknowledgment by either side of the warring sides of direct contacts.

– ‘Choose conversations over combat’ –
On Saturday, Faki held talks with former Nigerian President Obasanjo and visiting US envoy to the Horn of Africa, Mike Hammer.

“I hope the parties to the conflict will have the courage to choose talks over combat and participate in an African Union-led process that produces lasting peace,” Hamer said in a New Year message to Ethiopians on Sunday.

Map of Ethiopia showing the Tigray region
Fighting has erupted on several fronts in northern Ethiopia since the resumption of hostilities on 24 August, with the other two sides accused of shooting first and violating the March truce.

The last battle initially erupted around the southeastern border of Tigray but has since spread to areas west and north. Initial clashes, the Tigray People’s Liberation Front accused Ethiopian and Eritrean forces of launching a large-scale joint attack on Tigray on 1 September.

On Thursday, the United Nations said renewed fighting had halted much-needed aid shipments to Tigray, both by land and air.
The March truce allowed aid convoys to travel to Mekele, the capital of Tigray, for the first time since mid-December.

Countless civilians have been killed since the outbreak of war in Africa’s second most populous country, and millions of people in northern Ethiopia are in need of emergency aid.
Abiy, a Nobel Peace Prize laureate, sent troops to Tigray in November 2020 to oust the Tigray People’s Liberation Front in response to what he described as the group’s attacks on federal army camps.

The TPLF regained control of most of Tigray in a surprise comeback in June 2021 and expanded into Afar and Amhara, before fighting reached a stalemate.